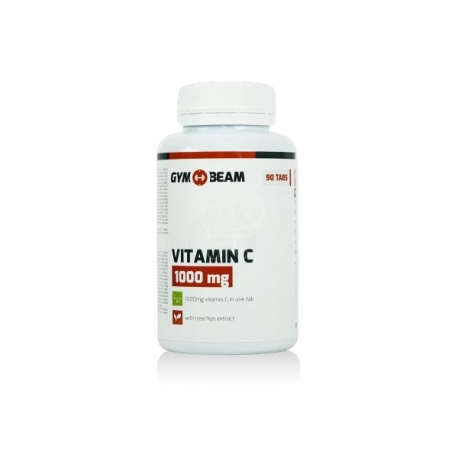 By buying this product you can collect up to 4 loyalty points. Your cart will total 4 points that can be converted into a voucher of 0,60 €.

Vitamín C 1000 it is a nutritional supplement, that strengthens the immune system, serves as prevention of flu like illness, reduces the duration of common cold and other viral diseases, and also stimulates collagen production, which is appreciated not only by athletes.

Vitamin C (ascorbic acid) is from the water soluble vitamin group, therefore starts to excrete by urine couple hours after taking. This is exactly the reason, why you need to supplement this vitaminevery day. Vitamin C with prolonged effect is gradually released for a period of 8-12 hours, ensuring optimal levels in all tissues and its effect is applied uninterruptedly.

Vitamin C 1000 is a popular nutritional supplement among athletes, that helps to maintain immune function during and after intense physical exercise. It boosts immunity and is a great prevention of flu like illness, reduces the duration of common cold and other viral diseases. In addition, it stimulates collagen production and is theredore ideal for the proper function of bones, joints, ligaments and the maintance of healthy skin, hair, gums, teeth and muscles. It is effective for strengthening the blood vessels, veins and capilaries. It also reduces the risk of varicose veins and prevents blood injuries, what reduces the risk of heart attack.

Scotish surgeon named James Lind has tested citrus fruits on British sailors In 1747, thanks to which he discovered a cure for scurvy. Later, in 1928 the active ingredient vitamin C was discovered from lemon juice. Ascorbic acid was first isolated by a Nobel Prize winner Dr. Albert Szent-Györgyi. Another person, who was able to synthesize ascorbic acid, was Linus Pauling, who won two Nobel Prizes, one for peace and the other one for chemistry. They both lived a beautiful and long life (93 years), and many people say their long lives were thanks to vitamin C.

• protects the body's tissue and other vitamins from free radicals,

• contributes to the normal function of the immune system during and after intense exercise,

• contribute to the normal function of the nervous system,

• helps to reduce fatigue and exhaustion,

• it is a natural antihistamine.

• it has beneficial effects on the eyes, therefore is often used in the treatment of glaucoma and cataract,

• it effects varicose veins and hemorrhoids,

• degrades cholesterol in the liver, protects against heart disease,

•  protects against cancer of the pancreas, esophagus, stomach and rectum cancer,

Vitamin C is necessary for the amino acid metabolisms, which is involved in the synthesis of collagen. Vitamin C deficiency occurs by the solidity of the vessel wall, especially capillaries, increased bleeding, and also a reduced strength of teeth ligaments and the associated loss of teeth. It also supports the absorption of iron, stimulates white blood cells, bone, teeth and carlitage development. IT also participates in the antioxidant defense of cells.

21 other products in the same category: